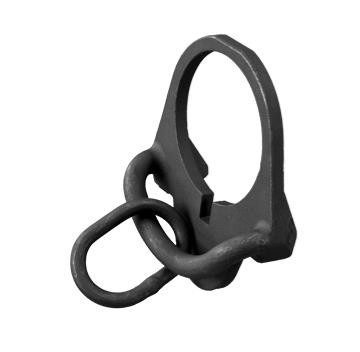 The ASAP Ambidextrous Sling Attachment Point allows a range of motion greater than 180 degrees, enabling true ambidextrous weapon manipulation for both left and right handed shooters. The ASAP replaces the standard AR15/M4 carbine stock receiver end plate, providing a tactical advantage by minimizing sling snagging and facilitating easy transition to and from weapon and reaction side shoulders. The ASAP works with one-point type slings with snap hook style attachments such as the Magpul MS3. Made from precision cast black manganese phosphatized steel, the ASAP is compatible with both mil-spec and commercial-spec carbine receiver extensions (buffer tubes). The ASAP has been proven to withstand stress tests of over 300lbs.

This product hasn't received any reviews yet. Be the first to review this product!